Jan and Leah, Kyle’s mom and sister, hosted my first baby shower last Sunday.  They did such a wonderful job decorating the house and it was so wonderful to see so many people I hadn’t seen in a long time. As Stephanie and I were getting ready, I was telling her that it was finally settling in that Katelyn is going to be making her arrival in just 7 weeks! It’s hard to believe how quickly time has flown by, and it seems like only yesterday that Kyle and I said to each other, “ah, no biggie, we have plenty of time…. she’s not coming for 9 more months.” Now we look back and laugh at how fast the time is passed and now we’re talking about where we want to set up the crib and what furniture we can sell or give away to make room for a nursery. Kyle had been on a business trip to Nashville, TN, and didn’t arrive home until Sunday afternoon, so he arrived at the shower around the same time I did. Kyle had plans to kick it with some friends of ours during the shower so that he could help me pack up the car and bring stuff home. We were able to fit everything we received, except the crib and pack n play into my car, so it was a good thing we had his too.
At the shower we played a game where each person had to cut a piece of string the length they thought would fit around the biggest part of my belly. It was really funny to see the looks on some faces when they realized how big they cut their piece of yarn. Some even apologized. But I wasn’t offended, I feel like being pregnant is the one time it feels okay to measure your circumference. The food was fabulous, prepared by a wonderful chef, Marguerite, who I worked with several years ago at Soiree Catering. She now has her own company and their food is phenomenal. If you want her number just ask. I took pictures of the yummy food and the gorgeous cake, prepared by Cinderella Cakes. It had a vanilla and a chocolate layer. Boy, my family knows me so well!! =)
I tried to take several pictures of the cake, presents, decorations and centerpieces. Here are some that I took. 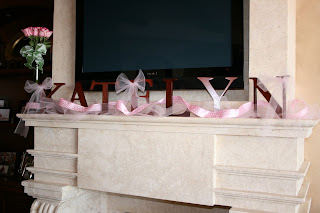 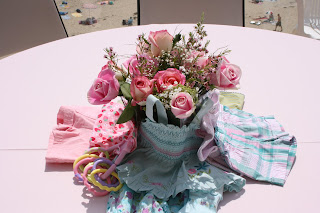 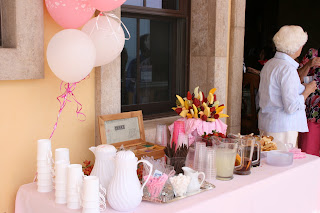 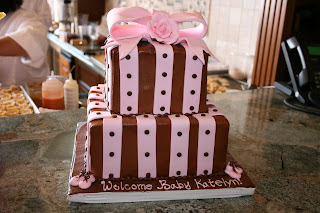 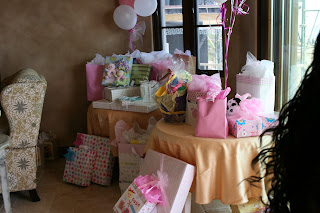 Jan’s friend Betty made me a diaper cake, yes you read correctly, a diaper cake. She hand rolled 80+ diapers into 3 layers and created a beautiful cake. Here’s a picture of it. 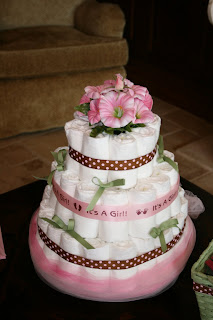 It was so great because my mom just got an iMac that has a built in camera and she was able to join us at the shower via a program called iChat. She got to see me open all my presents, too bad she didn’t get to sample all the tasty food we had at the shower. The shower was 2 days ago and I already have all my invitations ready to go out and all the presents sorted in the nursery. I know I’m crazy! Since the nursery is still partially Kyle’s office I felt he deserved more than 6 inches of walkway going in and out of the room. He’s working at the dinning room table today!
Thank you to everyone who came to the shower, you have truly blessed Kyle, Katelyn and I in more ways than you know!!! Thank you for your continued prayers and we look forward to counting down the arrival of our bundle of joy!