I’m a huge fan of the tv show Shark tank. If you haven’t seen it, you must. After all, most of us are mommypreuneurs. The whole concept is that you take an idea or product you have and ask the sharks for a certain $$ amount in exchange for a percentage of your company. Sometimes the sharks will laugh you out the door… have you seen the pig alarm clock that will cook bacon instead of startling you out of your sleep? Then there are times when the sharks literally fight over who gets to invest in your company.
So Sunday night the hubby and I are relaxing on the couch watching Shark Tank on the DVR. First up was a woman asking for $100,000 in exchange for 15% of her business. What business? CitiKitty.
Let me show you:
{source}
Now I’m not a big fan of cats. In fact, the one time in my life we did own cats, we had more problems then we knew how to handle. Someone stepped on my cats paw and broke it. It hobbled in a cast for weeks. Then while wrestling with my brothers cat, my cat scratched his cats eyeball resulting in his cat wearing an eye patch. True stories people. In the end my brothers cat died of cancer and we gave my cat away.

For those of you who love cats, here’s a great option for you. You can potty train your cat to pee and poo in your potty for only $29.99! What a deal!! What’s even better is that since CitiKitty was on Shark Tank you can get a deal on your potty training Cat kit. It’s only good for a week so you better hurry. 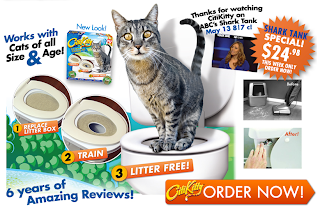 Here’s how it works you begin by moving the kitty’s litter box in the bathroom next to the toilet. Then you use the CitiKitty kit, which latches onto the base of your toilet, fill it with some flushable kitty litter and have your cat learn to jump up on the toilet seat and go. The next step is to pop out the the removable rings one by one until your cat is fully potty trained.

After watching the show and having a good laugh I had to go searching the internet for what people who have tried it were saying. Not gonna lie I’m still laughing as I write about this. Don’t worry I do agree that product, while humerous, is genius so calm down cat lovers. There are a bunch of people out there who are swearing by this product, however here’s a fun though to ponder:

Look whose laughing now. You know you are. I know that a lot of you are cat lovers so I’m watching what I’m saying. Otherwise I’m pretty sure my comment box is going to blow up with a million anonymous comments. So here it goes. It took me months, months just to get my daughter to pee and poo in the potty. There was bribery, promises made, packages upon packages of pretty panties bought in hopes of success before we finally were able to motivate her to give up the diaper. In the end we bribed her with dance classes and preschool. Who knew?! Although, now that I think about it maybe I should use Citi Kitty to potty train my son. It may go faster if he has a hole to aim into. Should I still use the kitty litter till he gets the hang of it. Just kidding. Ok, that’s it, I’m done.
You can go about the rest of your day now!
Happy Monday!

**Disclaimer: Everything in this post is my opinion. I’m not getting paid or compensated for anything I said for or against this product.