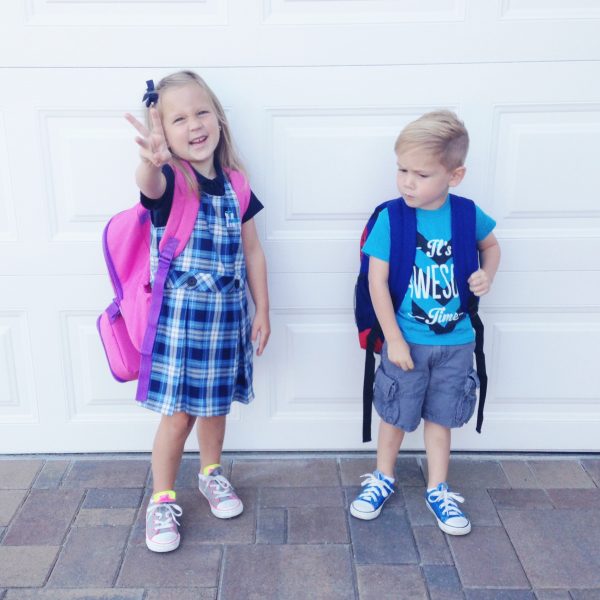 Three days down and I survived the first week of school

barely by the hairs of my chinny, chin chin.

What began as an excting new adventure soon filled with daily turmoil.

Day one, Katelyn came home with stories of only making one friend and someone stepping on her shoe, which untied her shoe lace, which made her cry because it hurt. There was an admittance that it was an accident it still seemed to scar her first day of school and it was the first story she told her daddy when she came home. Not how much she loved school, her teacher or the name of her new friend. Nope her untied shoe had stollen all the glory of the first day. I was also told by her teacher in passing that she had a so, so day, but no further explanation other than, “we’ll talk.” Upon arriving home, her plaid jumper came in the mail. She was so thrilled, I thought this could be the key to surviving day two.

Day two came and we drove to school a little more timid this time.

She didn’t want me to drop her off, I needed to park and come in. Then she lurked near me, only going off for moments at a time then coming back, but always with one eye on me like a hawk. I said goodbye at the bell, hesitant to leave her. Part of me wanted to grab her and run home where I could keep her sheltered forever and the other part of me wants her to learn how to suck it up because life is made of shitty and beautiful moments all rolled into one. When I picked her up hours later, the look on her face and the huge boo boo on both knees was the tell tell sign that day 2 hadn’t gone much better. She put herself out there and asked some kids to play tag and no sooner had she taken off running did she trip and fall on the asphalt and scrape both knees open. It’s been the worst boo boo we’ve encountered for a while for many reasons. It hurt, and she was embarrassed and as a result she sat out, by herself, the rest of recess and watched all the other kids play.

Gah, my heart wants to scream even writing this!

Again, another interaction from her teacher telling us as we drove off that she had a so, so day left me again discouraged. Instead of ignoring the situation, Kyle and I grilled her (gently) about her day. What things do they do? Daily routine? Is she listening? Does her teacher need to ask for her attention a lot? Everything in the books it feels like and her responses leave us wondering where the disconnect is. So I placed a phone call to her teacher, left a message, heard nothing back.

Day three came and went and we picked up a happy little girl, who made a friend and said she had a great day at school. No accidents, boo boos or tears. I breathed a sigh of relief. We’re still getting so, so’s from her teacher, but she did say that today was better. No sooner had we pulled out of the parking lot did another story unfold. During recess one of the girls she was playing with called her a Monster.  A FREAKIN MONSTER!!! Who are these 5 year olds?! Trying not to let the dragon inside me come out, I calmly tried to ask her more about the situation. She didn’t know why, she wasn’t mean to the girl and she thinks she was teasing, but her feelings were so hurt. Again, it was the first story she told daddy when she came home.

My heart is worn out

And it’s taking every bit of my over dramatic, over bearing, over protective Mama Bear side to not march into the school and demand to know why kids are allowed to call other kids Monsters! And not just any kid. My loving, smiling, joyful Katelyn. But I’m not. I realize that mean people exist and mean people suck and unfortunately even at the young age of 5 Katelyn’s already learning that.

It’s just sad that the sinful nature of the world is exasperating itself as such an early age.

Even as I sit here typing, I just can’t get past the word

So cruel and ugly even as a “joke”

Today begins a new week and I’m just praying my heart and hers will survive.

Here’s to having a fresh week filled with beautiful stories of her love for school and new friends.

Because, God help me, if there isn’t….

« Happenings Around the Web
Wear »