First off, Kyle and I just want to say how much we appreciate all your prayers this last week. We are having a much better week, this week, with Brayden. Last Saturday night, after going almost a full hour coughing non stop, which resulted in him throwing up, Kyle and I decided enough was enough and at 12:15am, I took him to CHOC in Orange. CHOC is a really great children’s hospital and they have a pediatric wing in their ER so we knew we would finally get some answers by taking him there. Since it was so late Kyle wasn’t able to go with me, he stayed with Katelyn. We were at the ER the entire night, seriously, B and I got home at 6:30am, but we came home with answers. After a through exam the doctor decided to do a chest x-ray. It was t.e.r.r.i.b.l.e!!!!!!!! They had to put him in this contraption called the Papoose 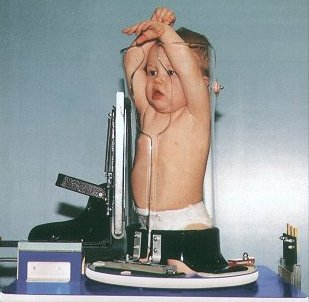 See I told you it was awful! He cried, tears streaming down his face and his cry was beg for his Mommy to rescue him. At this point it was 3am and I was tired and exhausted and the tears just began to fall as I tried to calm him down. Finally they got what they needed and Brayden was released. When we got back to our room, Brayden passed out. Poor little man was so tired and was loosing his voice from all the coughing. The doctor came in not too long after to tell me that the x-ray made it look as though Brayden had an enlarged heart…. WHAT?! …. and so they wanted to repeat the x-ray to be certain. So here I was laying there, Brayden fast asleep, waiting for them to get us for the next set of x-rays. I’m loosing it at this point and wishing Kyle was there with me. The 2nd time in the x-ray room wasn’t as bad as the first although having to get back in that contraption woke him up, but the tech was a pro and had him in an out of there so fast. I was so grateful.
After what seemed like an eternity the doctor came back in to let me know that B’s heart was fine but that his trachea looked narrow due to inflammation and diagnosed Brayden with Tracheal Bronchitis. Finally, an answer! Brayden is now on antibiotics  and doing so much better. He’s not coughing at all during the night so he’s sleeping better and the last couple of days we could count on one hand how many total times he coughed throughout the day. This is truly an answer to prayer and we hope that the cough will soon be gone forever.
Please keep Brayden in your prayers. We really want his cough to go away completely!!
Love,
Alissa

« Winners, Merry Christmas!
Is it Just Me »