Yesterday we decided to lay low and other than a trip to Walmart to grab a few things we decided to stay home. We had been out and about quite a bit over the weekend trying to fit in as many fun things as we could while my brother Josh was here, so we felt it would be good for Katelyn to stay home and relax. Katelyn has been loving watching Sesame Street in the mornings. She’s fascinated by Elmo…. I mean who isn’t!? 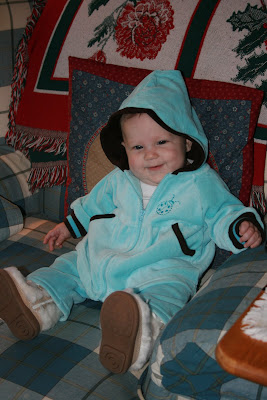 Today we ventured into Boston so that we could take Katelyn into Mom’s office and show her off. She has not only taken her first plane ride on this trip, but also a subway and train ride as well. She was so intrigued by all the people around her and was all smiles as people walked by and commented on how cute she was. She is also becoming quite the talker. I can’t wait till she starts saying “Mama” and “Dada.” I know it’s coming…. in the meantime, it’s fun to hear her jibber jabber. The train and subway ride pooped her out and she was already asleep in her Bjorn before we got to the office. Then once we arrived and started talking to people she woke up with a smile and began jabbering away again. Everyone loved her!

After we met everyone at the office we headed to CPK for some lunch. Katelyn ate and fell asleep on Mom’s furry jacket on the seat in the booth and Mom, Kyle and I were able to chat and enjoy our lunch. Then we were off again to head to Newbury Street to the Johnny Cupcake store. Kyle had heard about this store a couple months ago and we almost made it to the opening of the LA store. We figured since it was right across the street from the building my Mom works in we should make a pit stop and check it out. I love the logo… crossbones and a cupcake. We had to take a “tourist” picture while we were there. After Johnny Cupcakes it was time to head home so we could eat dinner and Mom could relax before choir practice. Kyle stayed in Boston and headed to The Roxy to see The Academy Is. We got home a little after 5pm and were greeted by the 4 neighbor kids who had been waiting at my grandparents for over and hour for Katelyn to come home. Even though she was exhausted from not having her regular long afternoon nap she was all smiles and enjoyed hanging out with Kaitlyn, Maura, Jack and Patrick. They were enamored by Katelyn and didn’t want to go home when their Dad came to collect them. With promises they could come visit tomorrow they headed out the door and down the street. It was a long day, but a fun one! We are having a great trip and wish we could stay longer! 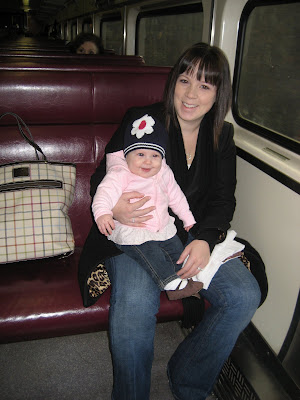 Katelyn on her first train ride. 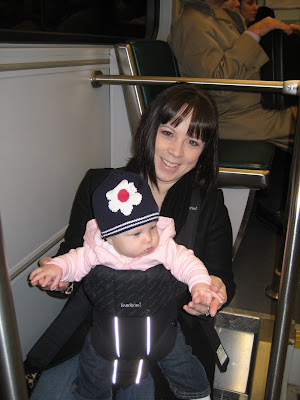 Katelyn riding the subway. She wanted to look at all the people… too cute! 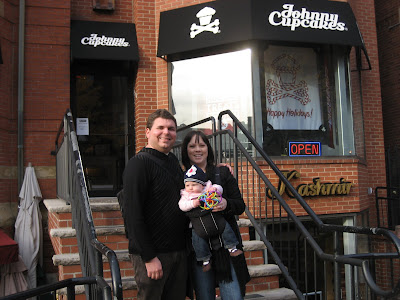 At Johnny Cupcakes in Boston. 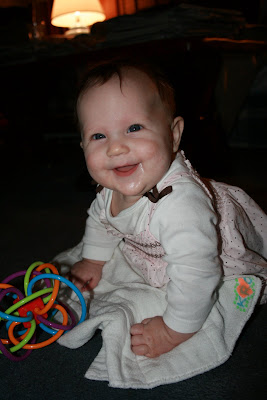 In my “Your baby is 21 weeks” email I got today it said that Katelyn should start to show an interest in sitting up on her own. It’s so true. She loved sitting up playing with the new toy her Grandma bought her today.