I know I haven’t blogged much this week, or at all, I should say, but for good reason. Katelyn’s been dealing with an on and off again fever all week long. She has gone from fussy to sleeping a lot and the whole time looking like she just didn’t feel well.  After giving her Tylenol for a few days Kyle and I thought it might be more than just something viral she was trying to fight off and decided to get her checked out. So yesterday we took her to an urgent care clinic, called UrgiKids, where they examined her and there was nothing outwardly wrong with her. She didn’t have an ear infection, pneumonia, a cold, or the flu so we were advised to take her to the ER so that they could do a septic work up. Now a septic work up includes a blood test, urine test, chest x-ray and a spinal tap (to check for Meningitis). So scary!! No one wants to see their baby poked and proded like that and I’m not going to lie, Kyle and I went back and forth for a few hours about whether we should take her. I just felt emotionally and physically drained from a week of trying to comfort Katelyn and feeling like she wasn’t getting any better, but not wanting to subject her to a spinal tap! We ended up taking Katelyn to Mission Hospital ER near our house since they have pediatric beds in case she would need to be admitted. They didn’t make us wait long to see a doctor since she’s under 3 months old with a fever for more than 1 day.

We spoke with the doctor and he explained to us in more detail the reasonings behind the importance of the septic work up and after some discussion we agreed to begin with the blood and urine tests and if they came back negative we would discuss the x-ray and spinal tap. The nurse arrived to insert an iv into Katelyn’s hand in case she needed antibiotics and draw blood. They had trouble taking blood from the iv location and another nurse arrived to draw blood from her other arm. Poor thing, she was so tired, so hungry, clearly not feeling well and having to deal with all these needles. In spite of all that, she was so good and only fussed a little. In order to keep the iv in they had to tape her arm to a cast-like pad so she wouldn’t hurt her hand or pull the iv out if she moved around a lot.
Then they attached a bag around her little girly parts to catch her urine (instead of using a catheter), which we hoped she would pee in while I was nursing her. I was convinced that between the iv fluids they were giving her and my nursing her peeing in the bag would not be an issue. Katelyn was relieved to finally get to nurse and she did a great job eating. I say this only because they say when babies are sick and have a fever they tend to not want to eat. Sure enough after she finished eating she peed in the bag and the first two tests were done. YEAH!! Now came the waiting. Kyle and I watched the Obama/McCain forum at Saddleback with Rick Warren and the Olympics while we waited.
The doctor came in about an hour later and told us that her blood work came back normal and that her urine test showed that she had a Urinary Tract Infection. WHAT!!! She’s so little, how did this happen? Kyle and I change her diaper so much and bathe her every night, I’m not going to lie, we were a little surprised. They assured us it wasn’t anything that we had done and that UTI is common in baby girls because their urethra is so little that it’s easy for bacteria to get stuck in it. Kyle and I were relieved that we didn’t have to subject her to the other two tests. We waited another hour for the antibiotics to be given to her intravenously and they the nurse returned to discharge us. After 5 hours in the emergency room we were able to take Katelyn home and we could tell she was already feeling better. She was all smiles as we said goodbye to the doctor and nurses.
Katelyn’s been eating and sleeping today, trying to get back on schedule. I have to go fill a prescription for her at Target when she wakes up. The UTI should clear up in about 72 hours but she needs to take her meds for 7 days. So that was our week in a nutshell. Other than having her 2 month pictures taken this week, I think we’re going to lay low. Please pray for a speedy recovery for Katelyn and that this next set of hospital bills are not too outrageous.
Love, Alissa & Katelyn 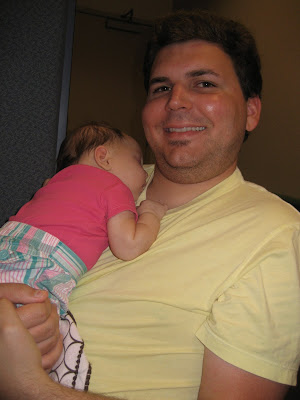 Kyle and Katelyn in the waiting room at UrgiKids 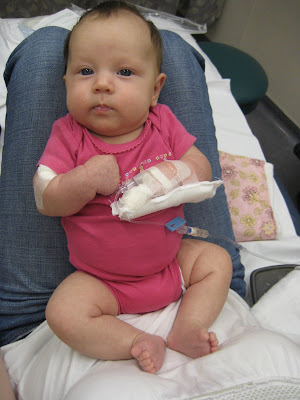 Katelyn after she got her iv put in, and her blood drawn 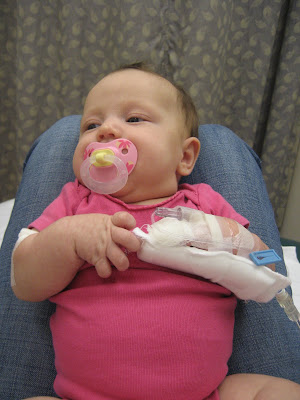 Relaxing with her pacifier after eating. Look at how big her belly is from all the fluids they gave her. She went through 5 diapers at the hospital!! 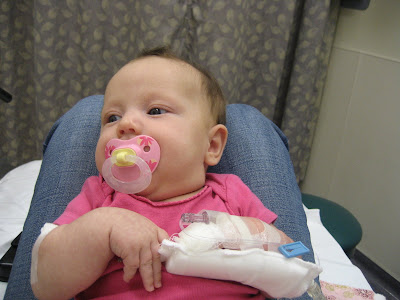 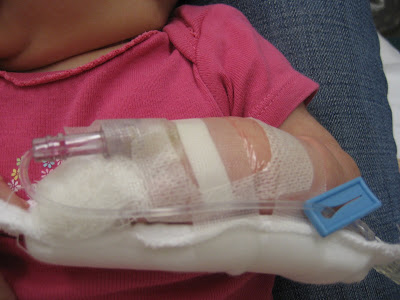 My poor baby girl, look at this “iv contraption” she had at the hospital.