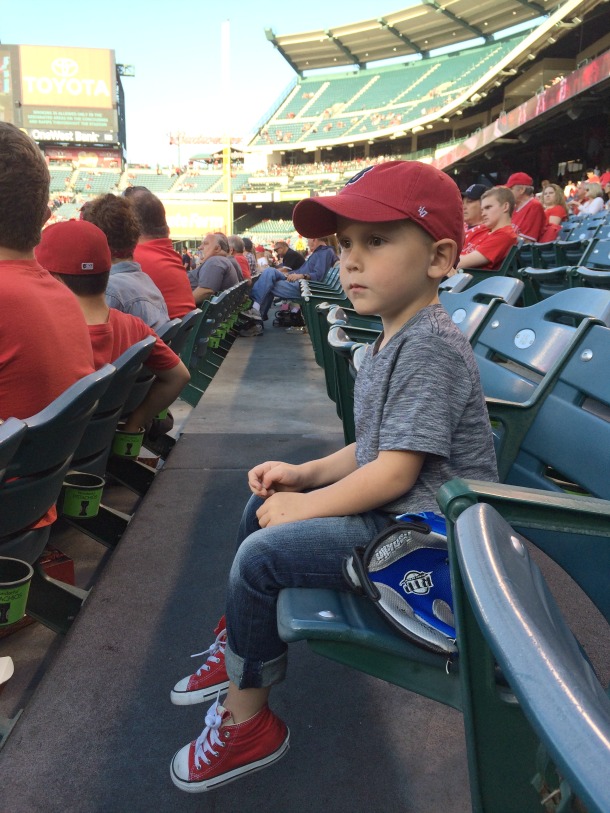 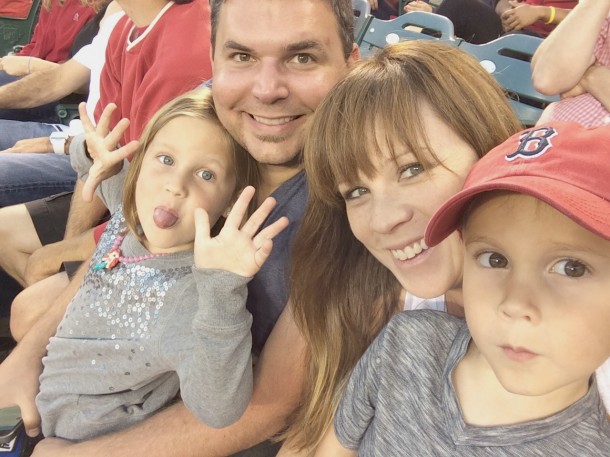 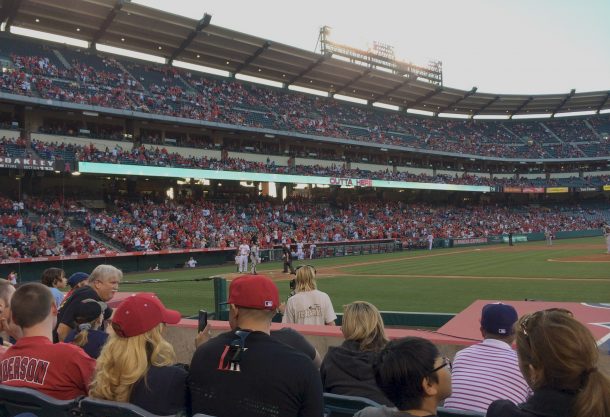 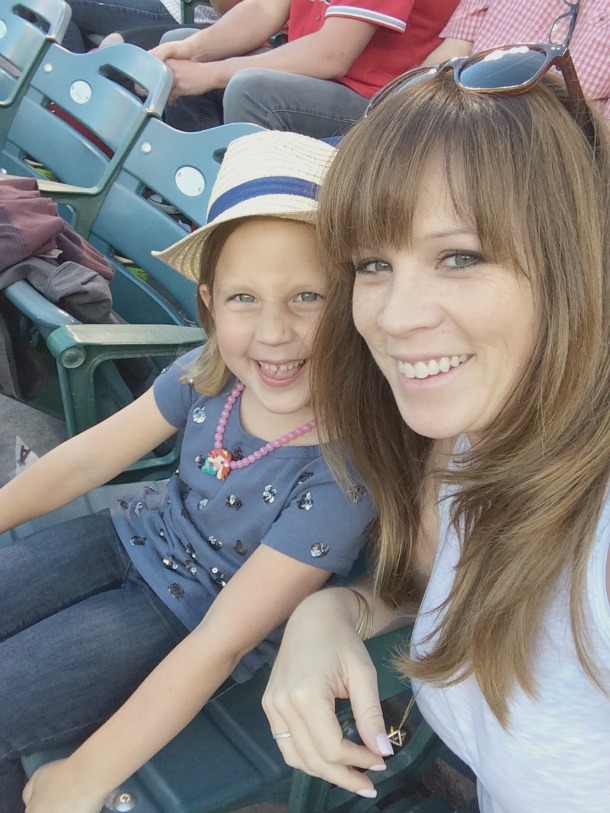 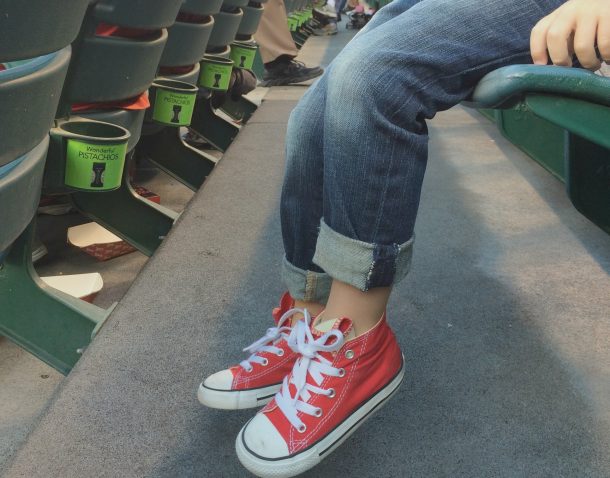 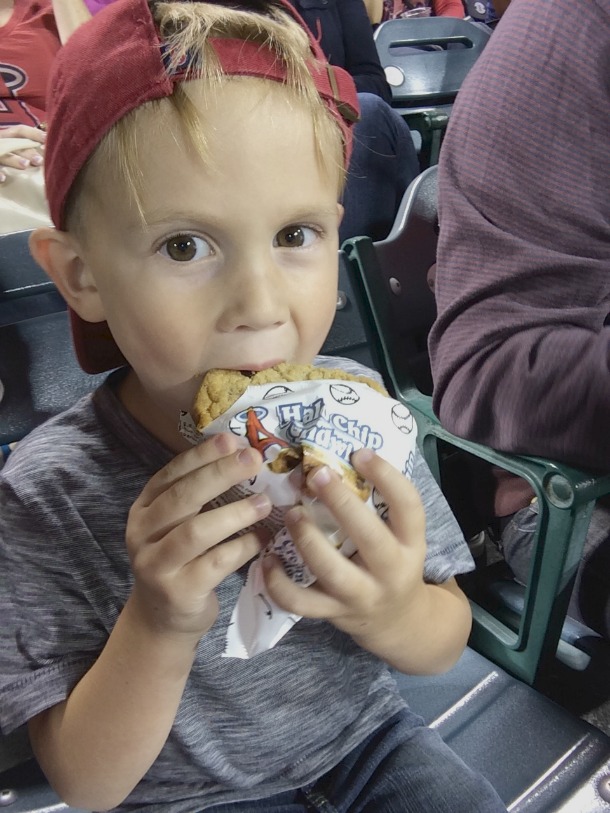 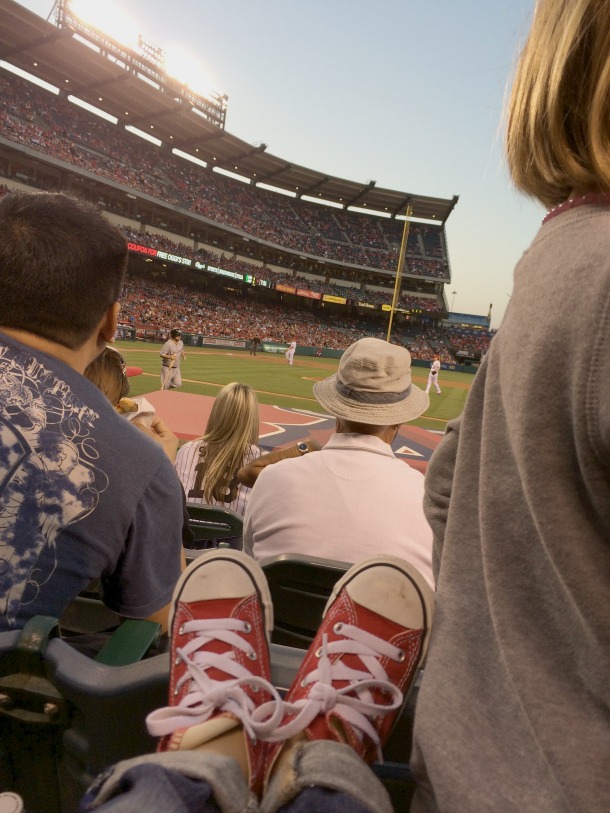 Last Friday night was unlike most Friday nights in our home.
With our weeks starting to blur together,
we’ve been working hard to create memorable experiences for the kids,
especially on the weekends.
When the opportunity to go to an Angel’s game arose,
we took it and thought it would be the perfect first game for the kids.
I wasn’t sure that they’d make it through the game,
but we hoped that the excitement of “Big Bang Friday Night,”
complete with fireworks would do the trick.
We won’t talk about how they got bored by inning 7 and we made them stay
only to find out fireworks got moved to Saturday nights.

As we arrived early and made it to our seats,
we could tell they were already enthralled by the atmosphere.
Especially Brayden.
His love for baseball began with watching the Red Sox play in the World Series last year.
The second they soaked it all in,
the hunger complaints began.
Kyle decided to take Katelyn with him to get food,
mainly because she had to go to the bathroom.

As Brayden and I sat there, watching the stadium seats fill with fans,
my phone started to beep at me.
Thinking that it was Kyle asking me about my dinner or drink preference,
I paused my conversation with Brayden to answer it.
And then something only God could orchestrate happened.

I looked at my phone to see I had gotten a text message from Jacqui.
She had told me that she ran into Katelyn in the bathroom,
and that Katelyn had come up to her and called her, not by name,
but as “Ryan’s Mommy,” hugged her and told her she knew what happened to Ryan and she was so sad.

When I got her text I blankly stared at it so confused.
What were the odds that we were at the same game and had no idea?
I asked her, “Katelyn, who?”
“your daughter”
“Are you at the Angels game with your family?”
“yes”
“and you ran into my daughter in the bathroom?”
“yes”
“oh my goodness, I just don’t believe it.”

We texted back and forth during the game light-heartedly,
and I carefully avoided bringing up Katelyn.
See I was so worried that maybe, just maybe,
running into Katelyn might’ve brought up all kinds of emotions,
anger, frustration even.
But, in my heart I felt like God was saying, I did this for her.

See, if you’ve been following Jacqui’s blog, you might have ugly cried
as you read her post last week about struggling with her identity as a mom.
Out of all the bathrooms in the stadium and all the people arriving for the game,
she ran into Katelyn,
a little girl who knows her by name,
yet she spoke identity back into her through two simple words, “Ryan’s Mom”

I waited till the next day to text Jacqui about what happened.
“I can’t believe we were all at the game last night and that you ran into Katelyn of all people in the bathroom. Even Katelyn can’t stop talking about it this morning.”
Then I saw the bubble, you know the one…
and she replied,
“My friends here on earth are my earth angels. Just so awesome.”

God gave her something He knew she needed.
And He did it through a small child.
It’s so incredible in the most powerful of ways.
And even more, it’s a great reminder that He uses us no matter what age we are,
in the most unexpected ways.

Even now, as I sit here typing this days later,
I still have chills.
You guys, He is so good.
And, by no means, does it fix or heal the hurt or the pain.
I think it was a momentary reminder that He hears her heart.
He knows Jacqui’s struggle and He wanted to remind her,
She is still Ryan’s Mama, always and forever.
She’s his Forever Mama,
and He knew that she and Dan would love him to the fullest extent of their being.
From now till forever.

With Father’s Day around the corner, I’m once again reminded that we need to
lift this Daddy up.
Surround him in prayer
and remember him on Sunday.
Dan was and still is an incredible Dad.
I’ve seen first hand the unconditional love he had for his son.
It truly is beautiful!

Thanks for listening friends,
and for loving this family through these moments,
both the painful ones and the small moments they find joy.
Let’s Live Loud like Ryan,
and be willing to allow God to use us in every way possible,
to bless the lives of others.