and clean. Well I’m pretty sure I’m going to be seeing this image a lot from now one. We officially have a mover and she is on the go! I left her for one minute in the living room playing with her toys to put some towels away and when I came back she was stuck under the dinning room table. Yikes! I have to admit it’s fun to watch her crawl around and explore what’s around her. And she laughs while she’s doing it. It’s so funny because I was so anxious for her to become mobile and now that she is, I’m asking her to slow down and enjoy relaxing and playing with her toys. I’m sure all you mothers out there are giggle and silently saying, “I told you so.” And you did. I had to get some shots of her crawling around. 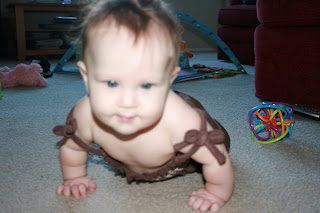 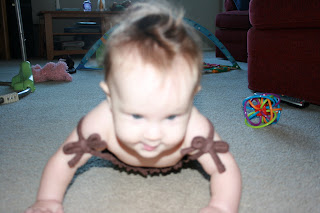 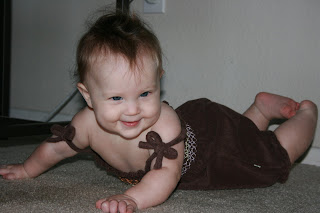 Oh and here’s her new favorite thing to do. And no… she can’t pull herself up there yet, but she loves to stand and hold onto tables, chairs, couches…. anything sturdy enough to hold her. 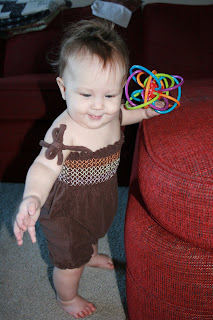 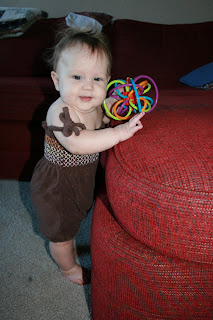 Kyle headed up to Sacramento for the weekend to see the band he manages, Bidwell, play their first home show since they got out of the studio recording. He hadn’t been to a home show, so it was great for him to see the band play in their home town and hear the new music. I’m jealous and wish I could’ve been there too. He said the show was awesome and lot’s of fans showed up. While Kyle was in Sactown, Katelyn and I spend Saturday down at the beach house enjoying the company of many of our family friends and the sunshine. I can’t believe it’s 80 degrees in January. Not going to complain, not many people can say they are heading to the pool in January. Today Katelyn and I woke up, ate, cuddled in bed, took a nap, cleaned house and now Katelyn’s napping again as I sit here blogging and watching the Chargers/Pittsburgh game.

Kyle comes home tonight and I’m so excited! We’ll have to try and do some fun family stuff this week because on Friday Kyle leaves for Peru for 8 days! Yes you read right… Peru. He and his dad are going with some people from Mariner’s Church through the Free Wheelchair Mission to Peru to build wheelchairs for those who can’t walk. It’s going to be an amazing experience and he’s so excited to have the opportunity to go.
Katelyn’s being dedicated at Mariner’s Church on January 31st and MOPs begins on January 20th so we’re excited for the busy month ahead.